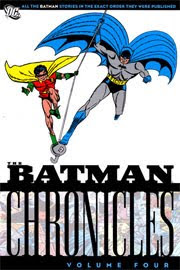 Well, I finally found my way back here, well its been 2 years lol.

So what have I been reading recently:
The Batman Chronicles Vol. 4.

What struck me when I was reading it was how much it was a social commentary on the time it was written in - the early 1940s. In nearly every story, Batman/Bruce Wayne decides to buy War Bonds.

It is even more striking when Batman and Robin team up against a Nazi plot. you can tell they are Nazi's due to the big image clues pasted all around the script.

But is it a good read?
Yes, its fun. There's the odd story that you could see being written now. For example, when Batman does a lecture tour and is quoted as saying the Joker wants to be caught as he keeps leaving clues around the place. The Joker isn't happy so goes on a deliberate crime spree that even has Batman guessing.

I would recommend it if you like light Batman stories, with lots of 'Pow' in them. There's nothing in it that is too offensive, so its probably suitable for all. Just bear in mind when it was written.

What did I learn?

Back when "the Golden Age of comics was eight," great stuff. The earlier volumes were a lot more scratchy and very edgy indeed but by this stage the Joker had stopped killing people and the artists had become more polished.